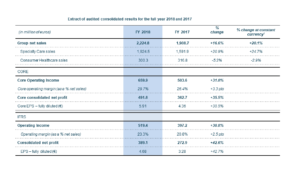 Q4 2018 pipeline highlights:
▪ On 15 November 2018, approval from the European Commission for Cabometyx® for the treatment of hepatocellular carcinoma (HCC) in adults who have previously been treated with sorafenib
▪ On 5 December 2018, initiation with Exelixis of COSMIC-312, a Phase 3 pivotal trial of Cabometyx® in combination with atezolizumab versus sorafenib in previously untreated advanced hepatocellular carcinoma (HCC)

David Meek, Chief Executive Officer of Ipsen, stated: “2018 was a tremendous year for Ipsen with industry-leading top-line growth and Somatuline® achieving blockbuster status. We also delivered significant margin expansion while investing to advance our R&D pipeline. The momentum of the business is strong as we enter 2019 and are on track to deliver our 2020 financial targets to exceed €2.5 billion in sales and 30% margins, one year earlier.
In 2018, we advanced our pipeline with Cabometyx® approvals in additional indications, acceleration of key programs and the establishment of new collaborations. We remain focused on executing our internal and external innovation strategy to build a robust pipeline, ensure continued growth and optimize value for patients and shareholders. We look forward to another outstanding year of strong industry-leading growth, expanding indications for our current medicines and advancing several innovative new chemical entities in the clinic.”

Note: Unless stated otherwise, all variations in sales are calculated excluding foreign exchange impacts established by recalculating net sales for the relevant period at the rate used for the previous period.

Specialty Care sales reached €1,924.5 million, up 24.7%, driven by the strong growth of Somatuline® and the €257.6 million contribution from the key Oncology launches of Cabometyx® and Onivyde®. Somatuline® growth of 24.4% was driven by continued positive momentum in North America (38.2% growth in the U.S.) and solid performance throughout Europe. Dysport® growth was fueled by strong performance and the resupply in Brazil, strong volume growth in the U.S. in the therapeutics market as well as the good performance of Galderma in the aesthetics market in Europe. Decapeptyl® sales reflect good volume growth across Europe and a good performance in China.

Consumer Healthcare sales reached €300.3 million, up 2.7% year-on-year re-stated from Etiasa new contractual set-up (or down 2.9% as reported), driven by the good performance of Smecta® and the contribution of the products acquired in 2017.

Core Operating Income reached €659.9 million in 2018, compared to €503.6 million in 2017, a growth of 31.0%, driven by the sales growth and after increased commercial investments for Cabometyx® and Onivyde®, and R&D investments to support the development of the growing pipeline.

Core consolidated net profit was €491.6 million in 2018, an increase of 35.5% versus €362.7 million in 2017, driven by higher Core Operating Income and due to lower effective tax rate and net financing costs.

IFRS Operating income was €519.4 million, up 30.8%  after higher amortization of intangible assets (excluding software) and impairment charges. Operating margin of 23.3% was up 2.5 points compared to 2017.

Closing net debt reached €242.5 million at the end of 2018, an improvement of €220.8 million over the closing net debt in 2017 of €463.3 million. This reflects positive Free Cash Flow generation of the Group which allowed the payment of milestones for Cabometyx® and dividends in June.

Comparison of 2018 performance with financial objectives

The Group exceeded its upgraded guidance provided on 26 July 2018 for Group sales growth and for Core operating margin.

The table below shows the comparison between the financial objectives provided on 26 July 2018 and 2018 actuals.

The Ipsen S.A. Board of Directors, which met on 13 February 2019, decided to propose at the Annual Shareholders’ meeting on 28 May 2019 the payment of a dividend of €1.00 per share for the 2018 financial year, unchanged from the prior year.

The Group has set the following financial targets for 2019:

Ipsen will hold a conference call Thursday, 14 February 2019 at 2:30 p.m. (Paris time, GMT+1). Participants should dial in to the call approximately five to ten minutes prior to its start. No reservation is required to participate in the conference call.

1 Year-on-year growth excluding foreign exchange impact established by recalculating net sales for the relevant period at the rate used for the previous period.

2 Consumer Healthcare 2018 sales growth up 2.7% restated from the new contractual set-up of Etiasa®, down 2.9% as reported.

Living with PBC: The Person Behind the Chart

A Life in a Day of an FOP person: from Empathy to Understanding…