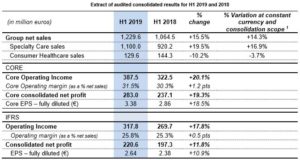 David Meek, Chief Executive Officer of Ipsen, stated: “In the first half of 2019, the strong operational execution of our growth strategy led to robust double-digit sales growth, continued Core Operating margin expansion and an upgrade in our sales guidance for full year 2019. The value of our pipeline was further strengthened by the closing of the Clementia acquisition and promising interim Phase 2 data for Onivyde in first-line pancreatic cancer. Going forward, we will continue to advance our strategic priorities to deliver sustained top-line, bottom-line and pipeline growth.”

First issuance in the private placement market and in the U.S. debt market for the company, illustrating the high level of confidence of investors in Ipsen and in the quality of its credit profile.

1Subsidiaries involved in the partnership between Ipsen and Schwabe Group are consolidated in accordance with the equity method starting 1 January, 2019. Year-on-year growth excluding foreign exchange impact established by recalculating net sales for the relevant period at the rate used for the previous period.

Review of the first half 2019 results

Note: Unless stated otherwise, all variations of year-on-year sales are stated at constant exchange rates and consolidation scope. Subsidiaries involved in the partnership between Ipsen and Schwabe Group are consolidated in accordance with the equity method starting 1 January, 2019. Year-on-year growth excluding foreign exchange impact established by recalculating net sales for the relevant period at the rate used for the previous period.

Specialty Care sales reached €1,100.0 million, up 16.9%, driven by the growth in Oncology of +20.7% from the continuous growth of Cabometyx® and Onivyde® as well as Somatuline® and Decapeptyl® across all geographies.

Consumer Healthcare sales reached €129.6 million, down 3.7%, mainly from the competitive environment for Smecta® in China.

Core Operating Income was €387.5 million, up 20.1%, driven by the growth of Specialty Care sales, a sound management of Selling expenses and an increased investment in Research and Development (including Clementia costs from Q2 2019).

Core Operating margin reached 31.5% of sales, up 1.2 points versus the first half of 2018 despite the dilutive impact of Clementia expenses.

Core consolidated net profit was €283.0 million, compared to €237.1 million in 2018, up 19.3%, after increased financing costs mainly linked to the Clementia acquisition.

IFRS Operating Income was €317.8 million after amortization of intangible assets and higher Other operating expenses, mainly related to Clementia integration costs and costs arising from the Group’s transformation programs. Operating Income margin of 25.8% is up 0.5 points compared to the first half of 2018.

IFRS Consolidated net profit was €220.6 million versus €197.3 million in 2018, up 11.8% impacted by the Onivyde® revised contingent earn-out and milestones accounting following the recent publication of positive results related to the ongoing developments on Onivyde®.

Free Cash Flow reached €101.0 million, down by €63.5 million versus 2018, mainly driven by a lower Operating Cash Flow combined with higher Other operating expenses and Restructuring costs.

The company’s auditors performed a limited review of the accounts.

The interim financial report, with regard to regulated information, is available on the Group’s website, www.ipsen.comunder the Regulated Information tab in the Investor Relations section.

Ipsen will hold a conference call Thursday, 25 July 2019 at 2:30 p.m. (Paris time, GMT+1). Participants should dial in to the call approximately five to ten minutes prior to its start. No reservation is required to participate in the conference call.

Living with PBC: The Person Behind the Chart

A Life in a Day of an FOP person: from Empathy to Understanding…