Welcome to our dedicated section for investors

Ipsen Consumer HealthCare is the historical activity of Ipsen: a long-standing expertise in gastrointestinal (GI) disorders developed over more than 45 years, and a global footprint in 80 countries.

Our brands related in 4 main therapeutic areas (GI, cognitive disorders, pain, cough and cold.) have strong medical and commercial value, allowing for sustainable and shared growth with our partners.

We believe every day matters

At Ipsen Consumer HealthCare, we are committed to taking care of patients and consumers around the world, by providing comfort and relief when they need it most. We work with our partners and healthcare professionals to deliver a broad range of healthcare solutions that help people get the most out of every day.

Over the years, we have developed a portfolio of well-known brands that we continue to consolidate. These strong foundations have led us to strengthen our position in key European markets (France, Italy), and capture market growth in emerging markets such as Russia, China and Algeria.
In addition to leveraging our key brands (Smecta®, Forlax® & Tanakan®), we are extending our capabilities to include new solutions like medical devices and food supplements.

Consumer HealthCare at a glance

“The whole team is fully committed to bring people across the world care and comfort in their daily lives with health care solutions they can trust.”

Ipsen’s history shows how entrepreneurship, ambition and tenacity have transformed the small-town French pharmacy created in 1929, into a global leader in specialty care. With this same mindset, we are transforming our heritage in primary care into a successful Consumer HealthCare business with a global outlook.

Ipsen’s long-standing expertise in consumer HealthCare spans the value chain, from active ingredient, to finished product, to the patient, with special expertise, in gastrointestinal (GI) disorders.

Over the decades, we have developed an expertise in clay-based products as well as Gingko Biloba natural extracts. This expertise has led to the launch of brands such as Smecta® for diarrhea, Forlax® for constipation, Fortrans® and Eziclen®/Izinova® colon-cleansing solutions, Tanakan® for cognitive disorders.

The 5 most recent illustrations of our transformation

We have revitalized this activity by enriching our capabilities, reinforcing our portfolio and expanding our geographical footprint.

New formulations and new partnerships have been developed to better serve the needs of patients around the world.

We signed an agreement with the Swedish firm Probi for the commercialization of the probiotic strain Lactobacillus plantarum 299v (LP299V®).

We acquired (from Sanofi and Boehringer ingelheim) six consumer healthcare products in some European territories. This transaction further accelerated the development of our Consumer HealthCare business and our conversion into an OTx (combined prescription and over-the-counter) business model.

We acquired 100% of the Italian company Akkadeas Pharma, whose diversified portfolio includes probiotics, medical devices and food supplements. In addition to providing a springboard for Ipsen’s future development in Italy, Akkadeas has become our Italian distributor for Smecta® (distributed under the brand name Diosmectal® in Italy).

We acquired (from Novascon) Floractin®, a range of probiotics in Poland.

Because every day matters to each of us, Ipsen Consumer Healthcare constantly innovates for the benefit of both patients and consumers, offering a large portfolio of drugs, medical devices and food supplements solutions that are scientifically proven and recognized by healthcare professionals. 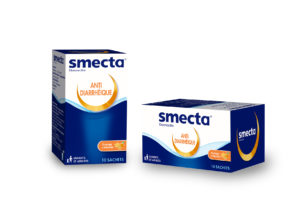 Smecta® is an oral formulation of pharmaceutical clay of natural origin indicated in the treatment of acute diarrhea in both adults and children above 2 years old in association with ORS, and the symptomatic treatment of digestive pain and functional chronic diarrhea in adults. The active substance in Smecta® is Diosmectite.

Smecta® is produced in Dreux (France), except for the Chinese market (Production in Tianjin) 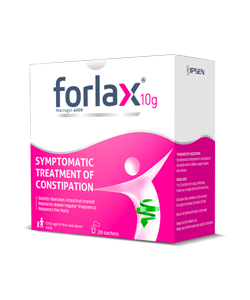 Forlax® is an oral osmotic laxative indicated for the symptomatic treatment of constipation in both adults and children above 6 months of age. Its active substance is Macrogol 4000, a linear polymer of polyethylene glycol (PEG) of high molecular weight. 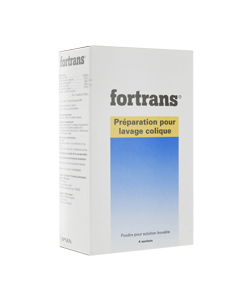 Fortrans® is indicated for colon lavage in the preparation of patients prior to endoscopic or radiological investigations, colon surgery in adults. 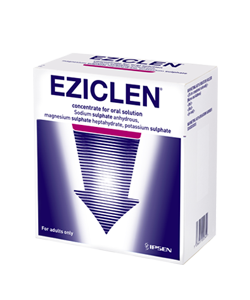 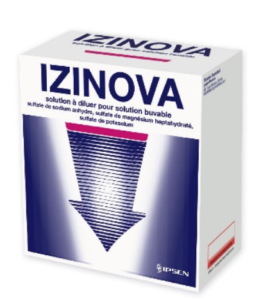 Eziclen® is a low volume osmotic laxative, indicated in adults for bowel cleansing prior to any procedure requiring a clean bowel (e.g. bowel visualisation including endoscopy and radiology or surgical procedure). 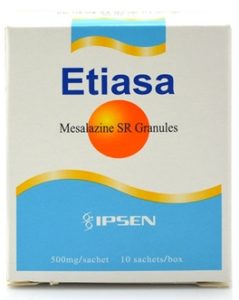 Etiasa® (mesalazine) is indicated in Inflammatory Bowel Diseases (Ulcerative Colitis), for the treatment of mildly to moderately active condition and maintenance of remission.

In 2015, Ipsen renewed its exclusive agreement with Ethypharm to promote and distribute Etiasa® in China. 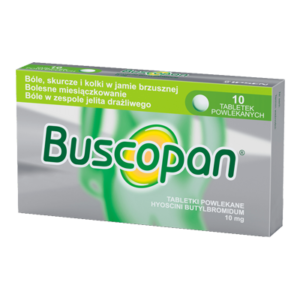 Buscopan® is a solution that works after 15 minutes and indicated in abdominal cramps within gastrointestinal tract, Irritable bowel syndrome, painful menstruation, pain in the biliary ducts and renal colic. 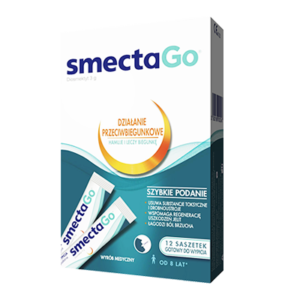 Launched in 2015, smectaGo® is used in the short-term treatment of acute diarrhea (children above 8 years old), and for chronic diarrhea and abdominal pain (adults). 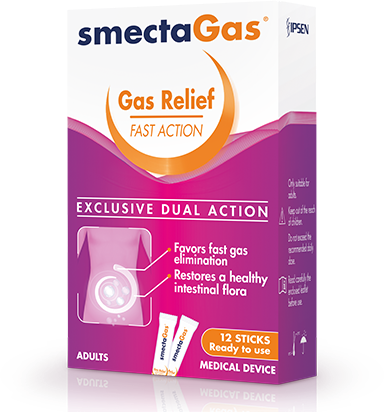 Launched in 2018, smectaGas® proposes an exclusive dual action against gas and bloating that favors a fast gas elimination and helps to restore a healthy gut microbiota.
smectaGas® is presented in a ready-to-use vanilla powder stick. 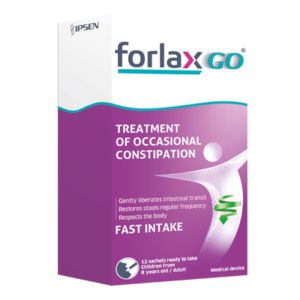 Launched in 2018, ForlaxGo® is a medical device for the symptomatic treatment of occasional constipation in adults and children from 8 years of age. The main component of ForlaxGo® is Macrogol 4000, the osmotic laxative present in Forlax®.

For oral administration, supplied in a single dose sachet, with raspberry flavour. 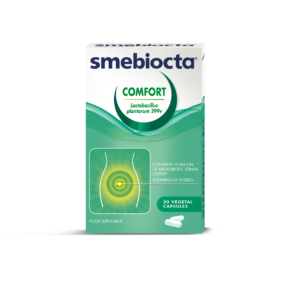 The first food supplement launched by Ipsen. In April 2016, Ipsen signed a license and supply agreement with Probi for the commercialization of its strain Lactobacillus plantarum 299v (LP299V®). Smebiocta Comfort® is a scientifically selected microbiotic strain that interacts with the microbiota to participate to intestinal comfort. 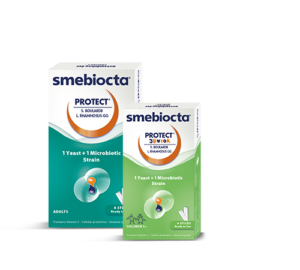 Launched in 2019, Smebiocta Protect® is a food supplement with an exclusive high dose combination of a yeast (Saccharomyces boulardii) and a microbiotic strain (Lactobacillus rhamnosus GG) and vitamin C. Can be taken during antibiotherapy, by both adults and children from 3 years old. 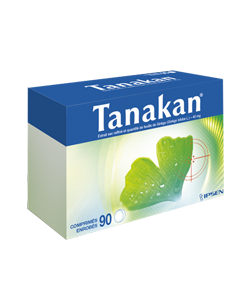 Tanakan® is indicated for the symptomatic treatment of cognitive disorders in the adults. The active substance in Tanakan® – EGb 761® – is a standardized extract from the leaves of Ginkgo biloba cultivated, extracted and purified under rigorous conditions.

Prontalgine® is an association of paracetamol, codeine and caffeine and is delivered only on prescription. It is indicated in patients older than 18 years of age for the treatment of acute moderate pain which cannot be relieved by other analgesics such as   paracetamol or ibuprofen (alone). 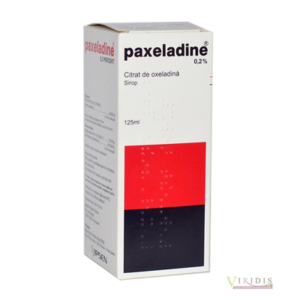 Indicated in the symptomatic treatment of non-productive cough.

PRONTADOL® composed of 500 mg of paracetamol and 50 mg of caffeine indicated in adults and children (over  15 years old ), for the symptomatic treatment of mild to moderate pain and/or febrile conditions.

Ipsen has a proven track-record on entering into successful long-term agreements including acquisitions, in-licensing, out-licensing and other co-marketing and co-promotion projects across the world.

Ipsen CHC regularly invests in its industrial sites to keep them at the forefront of technology and efficiency, meeting strict quality and safety criteria.

70% of our world production comes from France, with 2 manufacturing sites:

Our industrial site in China (Tianjin) is dedicated to the Chinese market.

Those 3 sites continuously work to improve their social and environmental impacts across the value chain: they are certified ISO 14001 (environment) and OHSAS 18001 (safety and health). Dreux has been Certified ISO 50001 (energy savings) end of 2020.

Ipsen also owns, together with Schwabe, one joint-venture in Cork (Irland) and one in Riazzino (Switzerland) dedicated to the production of natural plantation extracts (Ginkgo Biloba).

Our 1500 colleagues worldwide are united by their confidence in our business, and their desire to improve people’s quality of life every day.

By joining Ipsen Consumer HealthCare you will: 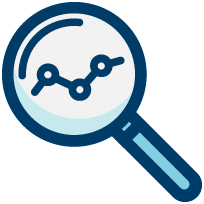 Ipsen offers exciting opportunities that will challenge your abilities, expand your skills and reward your contribution in a positive atmosphere of personal and professional development.

Search for a Job

We use cookies to ensure that we give you the best experience on our website. If you continue to use this site we will assume that you are happy with it. OkPrivacy policy